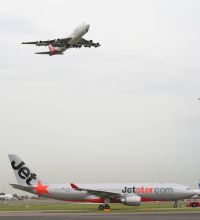 QANTAS has quickly taken steps to deal with the problems associated by the delays with the Boeing 787 programme, arguably before lease prices on wide-bodied aircraft harden.  The Qantas Group has announced it will take four additional wide-body A330 aircraft, on six-year leases, to allow for its Jetstar low cost subsidiary to take on its planned growth in the international market.  Qantas Chief Executive Officer, Alan Joyce, said that the first A330-200 aircraft would be delivered in November 2010. “A key component of the Group’s growth strategy is its significant fleet renewal programme,” he noted.  “We currently have more than 160 aircraft on order over the next ten years, including 50 Boeing 787s for operation by both Jetstar and Qantas.  B787 programme delays mean we have had to consider medium term options to support new long haul market opportunities for Jetstar.”  Jetstar currently flies to points in South East Asia and to Hawaii. www.jetstar.com