Your Editor was on one of the first ever Singapore Airlines (SIA) flights from Sydney to Heathrow.  He recalls that the Boeing 707 seemed to stop everywhere, and with the innovation of unlimited free beer some of the Australian passengers got rather inebriated.  The official journey time for the Singapore – London leg was 17hrs 35mins – compared with 12hrs 40mins today the A380. 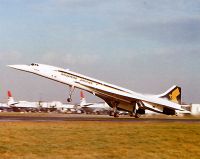 2014 marks 30 years since the first non-stop Singapore Airlines flight took off from Singapore’s Changi Airport to fly to Heathrow. The airline’s roots in the UK started back in 1971, when it launched three flights per week from Heathrow to Singapore (its first transcontinental flight).  London flights became daily in 1973 and Manchester flights began in 1986.  First Class passengers had a choice of three main courses, whilst Economy Class passengers were offered two.

The first Singapore – London flight departed with 127 passengers, compared with up to 471 on the A380 today.