Saudi airline flynas has pulled its Jeddah flights to Manchester.  The three times per week service will cease on 1 August.  However, the airline says that it is committed to the UK market and yesterday (27 July) launched a twice weekly route from Gatwick to Riyadh. 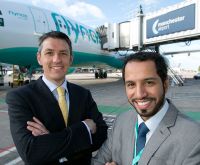 The airline hopes to capitalise on the high-traffic Eid holiday period over the launch week of operations.

The carrier launched Gatwick to Jeddah in April, adding a new dimension to its flight offering providing the first major local competition to Saudi Arabian Airlines (Saudia).  However, it appears not all the routes are meeting initial expectations and despite high hopes for Manchester flynas has found it hard to compete with the national carrier, which reintroduced its own non-stop flights from Jeddah to Manchester earlier this year.