Under the new management of Alexandre de Juniac, Chairman and CEO of Air France-KLM Group has reported a first-half net loss of €614m, a reduction from the €799m for the same period in 2013. 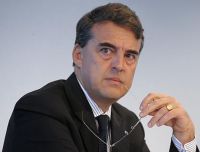 The airline said its Transform 2015 plan was on track to achieve cost reduction objectives, but warned the economic environment remained weak as currency fluctuations continued to impact on revenues.  Overcapacity, it said, was hurting yield on key long routes, especially to North America and Asia.  Although first-half revenue was down 1.8% to €12bn, the Group said that this included €287bn of negative currency impact.

First-half operating costs were reduced 3.6%, with fuel costs down 5.9% and employee costs down 3.6%.

De Juniac said that Transform 2015 would be completed in a few months and had “fully delivered on structural cost reduction leading to a significant improvement in the financial situation.”  He said that the programme would be replaced with a five-year successor plan currently being worked on.

The AF boss (51) has now been at the airline for two years, and CEO for the last 12 months.  His background includes both business and politics.  He took over from Jean Cyril Spinetta, the former boss bought in to rescue the airline. www.airfrance.com