The Royal Jordanian (RJ) routes to Delhi, Mumbai and Lagos are to be dropped.  RJ will stop operating to Mumbai on 10 September, to Lagos on 10 October, and to Delhi on 31 October.  With the closure of the three destinations, the RJ total is 51 routes. 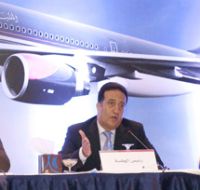 Nasser Lozi, Chairman of the Board/President and CEO of RJ, said that the decision is part of a synchronized plan to turn around the airline covering operations and financial structure.  The move comes at a time whilst RJ is facing difficulties due to the instability in the region and high fuel prices. #####

Lozi attributed halting these flights to the reduced demand on travel from/to these cities due to the aggressive growth of regional competition and increased operating costs.

He added that shutting down the three destinations raises the number of destinations that RJ has stopped this year to eight.

He pointed out that RJ suspended its flights to Alexandria, Colombo, Milan and Accra last April and May.  Additionally, the RJ-owned Royal Wings Company has been running the scheduled RJ flights between Amman and Sharm Sheikh as of last April.  He confirmed the first Boeing 787 shortly with five arrivals by the end of the year. www.rj.com