ANA will become the world’s first airline to operate the new stretched version of the Boeing Dreamliner when it launches services on domestic Japanese routes in August with the 787-9 variant of the aircraft.

Some 20ft longer than the original aircraft this latest variant will be equipped with 395 seats, 60 more than the 787-8 when flown on domestic routes.  Beginning in April 2015, ANA will introduce the new aircraft on international routes.  ANA was the launch customer for the Dreamliner and is the world’s biggest operator, having ordered a total of 80 aircraft, 36 787-8s (28 already delivered) and 44 787-9s.

In advance of bringing the plane into scheduled commercial service, ANA will operate a special commemorative flight for the Dreamliner on 4 August flying Japanese and American elementary school children living in Japan.  The aircraft will take off from Haneda Airport and circle Mount Fuji, one of Japan's best known landmarks and newest World Heritage Site.  The Tomodachi logo will be displayed on the new aircraft, in support of the initiative to strengthen Japanese-US ties. www.ana.co.jp 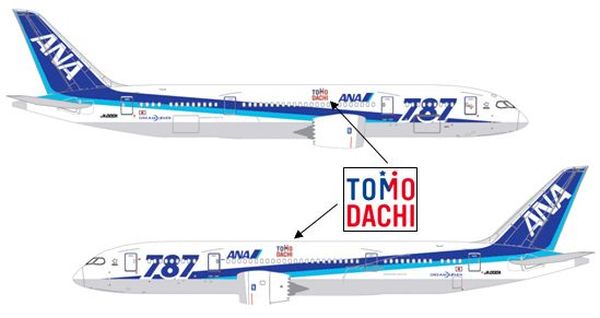