The race to the future bumped firmly into déjà vu when Norwegian Air launched its much-heralded low-cost, trans-Atlantic scheduled services from Gatwick last week.  BTN was represented.    This was what our special guest reporter had to say.


It was preceded by the launch of twice weekly Los Angeles services (one way from £199) the previous day and followed by the introduction of twice weekly flights to Fort Lauderdale (£179) on Thursday.


Cabin refreshments and hold luggage is not included, which will add £35 each way, with a typical (cheapest) mid-week return service in August to New York actually costing around £750 if you add in food.

Without providing details, Bjorn Kjos said he was “satisfied” with forward bookings for the new UK – US services.

They were expected to maintain Norwegian’s overall average load factor of 90%.

Having entered the long haul market in 2013 after building its extensive short haul network over the previous 10 years, Norwegian looks set for significant expansion of low-cost intercontinental services.

Although precise future route development was unspecified, Gatwick appeared central to Norwegian forward strategy as Kjos joined Stewart Wingate, CEO of Gatwick, in promoting the case for a second runway.

“We are delighted to launch our US services from London Gatwick this week.

“A more competitive trans-Atlantic market can only be good news for passengers, in the same way competition between airports in London leads to more choice and better service.

To meet the demands of all passengers in the future and ensure an excellent choice of routes and fares, a new runway must be built at Gatwick,” he said.  www.norwegian.com 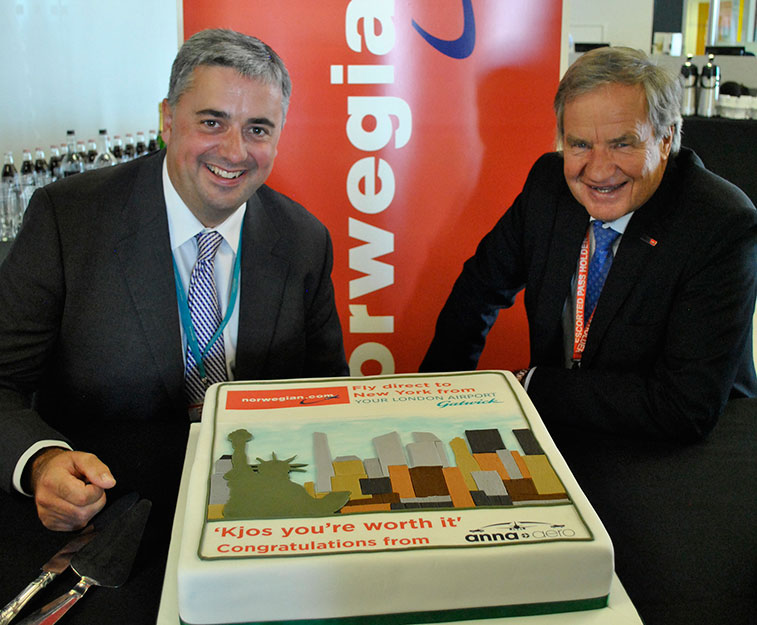