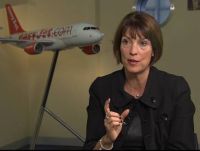 Now Britain’s largest airline, at least in terms of the number of flights and airports served, easyJet posted its half year results last week.

With first-half bookings in line with last year, it expects to report a first-half loss before tax of between £70m and £90m, assuming normal levels of disruption, compared to the £61m loss reported in the first half of last year.  Last year, Easter fell on 31 March, adding £25m of revenue to the first-half 2013 figures.  In the current financial year, Easter will fall in April.

EasyJet CEO, Carolyn McCall, said: “EasyJet has made a good start to the year.  We have delivered revenue per seat growth in the quarter against a challenging competitive environment and the tough comparison with the prior year.  The performance in the quarter demonstrates our continued focus on cost, progress against our strategic priorities and easyJet’s structural advantage in the European short haul market against both the legacy and low-cost competition.”