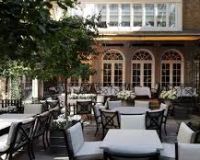 London’s Arts Club, at the bottom of Dover Street, near Piccadilly, is to open its own hotel in late 2014.  Founded in 1863, it has provided a haven for those people with relationships to the Arts, Literature or Sciences.  It has provided this hospitality ever since having survived two world wars, including a direct hit on the building during the Blitz in 1940, as well as political and economic anomalies over the years.

The Club relocated to its present elegant 18th century town house at 40 Dover Street in 1896, affording its members a comfortable and impressive base in Mayfair.

The plan is to add 16 hotel rooms and suites to its impressive Mayfair townhouse in late 2014.  Guests will be able to access all of The Arts Club’s facilities, including the three restaurants, garden and nightclub.

Memberships over the years have included writers such as Dickens, Wilkie Collins and Thomas Hughes; musicians including Tosti, Charles Halle and Liszt; artists typified by Leighton, Sickert, Millais, Rodin and Whistler, as well as an array of pre-eminent surgeons, solicitors and professionals.  www.theartsclub.co.uk