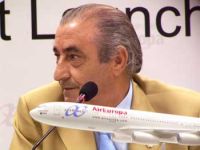 Could Spanish airline Air Europa be the next target for the ever expanding Etihad Airways?  The expansion minded Abu Dhabi carrier recently took a 33% share in Darwin Airways, based in Geneva, and has invested in a number of other European airlines including Aer Lingus, airberlin and Air Serbia.  (see Dublin doubled by Etihad)

The UAE flag carrier and the Spanish airline Air Europa have signed a codeshare agreement which will see both carriers significantly enhance access to and from Spain, the UAE and to destinations across globe.

Under the terms of the agreement and subject to regulatory approvals, Air Europa plans to commence a three times a week direct service between Madrid and Abu Dhabi in late 2014.

Etihad Airways will place its EY flight code on the new Airbus A330 operated flights, offering direct access to Madrid for the very first time through its global Abu Dhabi hub.

The two airlines will work together in the run up to the route launch, with Etihad Airways initially placing its code on Air Europa operated flights to Madrid from Amsterdam, Brussels and Milan Malpensa and beyond Madrid to Barcelona and Palma de Mallorca.  In return, Air Europa will place its UX flight code on Etihad Airways flights from Amsterdam, Brussels and Milan Malpensa to Abu Dhabi. www.aireuropa.com