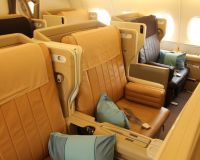 Fans of the Airbus A380 will now be able to take a through flight from Heathrow to Auckland following the signing of an alliance between Singapore Airlines and Air New Zealand (ANZ).

The A380 would be operated daily by Singapore Airlines between Singapore and Auckland, progressively replacing an existing daily service with the smaller Boeing 777-300ER.

A380 operations would initially be on a seasonal basis.  The B777-300ER would be used during off-peak travel periods.  Air New Zealand would launch daily services between Auckland and Singapore using newly refitted Boeing 777-200ER aircraft, taking over five flights currently operated by Singapore Airlines and adding two more weekly flights, increasing the frequency to daily.

Based on the current timetable this would cut travel time between London and Auckland to less than 24 hours, a reduction on the well established 26 hours ANZ route via Los Angeles, which requires obtaining a US ESTA.

Singapore Airlines’ daily Singapore – Christchurch service will continue as part of the alliance.

The parties are seeking approval for the alliance from the Competition Commission of Singapore and the New Zealand Minister of Transport.  Pending approval, flights could commence December 2014. www.airnewzealand.com www.singaporeair.com