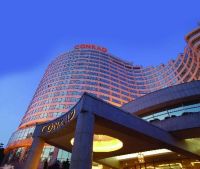 Hotel operator Hilton Worldwide has raised US$2.34bn on a surprising IPO, returning to the public markets some six years after Blackstone Group LP took it private in one of the largest deals of the leveraged buyout boom.

Blackstone took Hilton into private ownership in 2007 for US$26.7bn, including debt, at the height of the market.  The financial crisis hit soon after, leaving the company facing a large debt pile due to the leveraged buyout and a recession that hit business.  Blackstone refinanced about US$13bn of the hotel chain's debt before launching the IPO.

Founded in 1919 by Conrad Hilton, Hilton's brands include Conrad and Waldorf Astoria operating in 90 countries, with around 4,000 hotels and 600,000 plus rooms. www.hilton.com