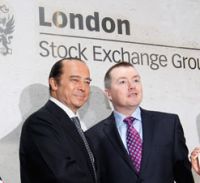 Operating profits (as opposed to net profits) at IAG more than doubled in the third quarter due in part to a recovery at Iberia, adding to a strong performance from Vueling.  Iberia remains a sore spot, however, and Group Chief Executive Willie Walsh warned there was still work to be done, noting that the impact of low-cost airlines and high-speed trains in Spain has hit Iberia's business hard during five years of economic recession and stagnation.

IAG's underlying operating profit was €690m for the three months to end-September, compared with a profit of €270m in the same period a year ago.

Operating profit at Iberia rose to €74m in the third quarter from a nominal €1m in the same period a year ago, while BA surged 78% €477m.  Vueling made an operating profit of €139m in its first full quarter with IAG.

"The airlines within the group are performing well, underlying market conditions remain unchanged, and the profit target for the year indicates that we expect to be profitable", Mr Walsh told reporters.

IAG is targeting 2013 operating profit of around €740m. The group had an operating loss of €68m in 2012.  It is looking at the Boeing 777X and with its strong Heathrow position stands away from the Davies controversy. www.iberia.com