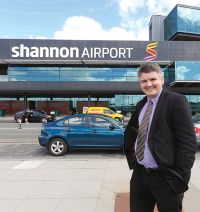 Having scaled back its business at Shannon Airport since 2008, Ryanair has announced eight summer routes for next year and increased frequency on the Stansted service.

The airline says this is due to the Irish Government scrapping its own version of APD (see BTN 21 October) but with the airport now a stand-alone Plc, with former Liverpool CEO Neil Packey in charge, there is clearly a much more progressive attitude by the operation.

Berlin, Faro, Fuerteventura, Krakow, Munich, Nice, Paris and Warsaw will be served from the airport from April.

Deputy Chief Executive, Michael Cawley, said: “The scrapping of the air travel tax will help restore Ireland’s competitiveness and attractiveness to overseas visitors from the UK and Continental Europe in particular.

“Having met with all five of the main Irish airports, we hope to announce further new route and traffic growth plans over the coming weeks”. www.ryanair.com