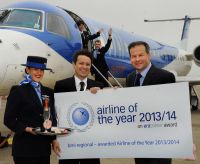 bmi regional is to introduce a double daily service between Newcastle and Brussels International on 3 March.  Flight time on a 49-seater Embraer jet is just 75 minutes.

The airline prides itself in offering a full in-flight service including hot meals (where appropriate) and a full bar selection.  The airline offers a free 20kg of hold luggage and 30-minute check-in.  It was named Silver Airline of the Year at the annual European Regions Airline Association (ERA) awards in Austria this month.

“This is our first route from Newcastle International and we’re delighted to provide the only direct flight for travellers from the north east of England to the Belgian capital”, said Cathal O’Connell, CEO at bmi regional. “This year we’ve launched over a dozen new routes from British airports and our new Newcastle to Brussels service opens up opportunities for those travelling for business and for pleasure”.

Newcastle International is the third British airport to be linked to Brussels by bmi regional, which currently operates services from East Midlands and Edinburgh.  The airline became independent from BMI in June 2012 and has pursued a sustainable expansion strategy whilst retaining full in-flight service and the highest customer service standards. www.bmiregional.com