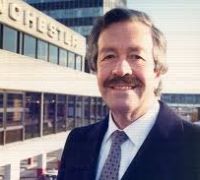 Sir Gilbert Thomson, who has passed away at the age 82, was Chief Executive of Manchester Airport from 1981 until 1993, a period of rapid expansion during which the airport became the commercial gateway to the north of England.

He was a ‘hands on’ airport man, having started his career as a baggage handler at Belfast International (then called Aldergrove) airport, always friendly to even the most inquisitive of young journalists.  He was recruited to Manchester from British Airways. It was their loss.

Gil had an obsession for cleanliness and was probably at his happiest just touring the airport and making sure everything was spick and span.  He paved the way for the second runway, work on which commenced in 1997.

Our condolences to his wife Dorothy and daughters Shirley and Fiona.