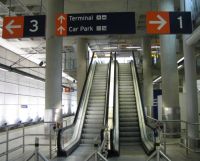 In its report “A World Class Rail Link for Stansted”, the body proposes plans that could cut journey times on the Stansted Express to below 40 minutes, as well as halving its delays.  Often called “The Stansted Slow” the train currently stops twice on the journey between the airport and Liverpool Street station near the Bank of England.  Whilst the Tottenham Hale Underground connection is essential for passengers requiring the Victoria Line the standstill at either Harlow or Bishops Stortford are purely for local use.

Chief Executive of London First, Baroness Jo Valentine, said: "Stansted has spare runway capacity.  A rail link on a par with those to Heathrow, Gatwick and other airports would spur competition, giving Stansted a better chance to attract new airlines and passengers".

Stansted rail’s biggest problem is the lack of capacity, the route mostly twin track and built over 100 years ago to satisfy Cambridge’s needs.

This follows ongoing disputes about upgrading London's airports to meet future capacity.  Aside from Stansted, plans include building a third runway at Heathrow or establishing an airport on an island at the Thames estuary. http://londonfirst.co.uk