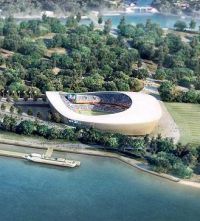 InterContinental Hotels Group (IHG) continues to expand in Russia and the CIS.

Holiday Inn Express Naberezhnye Chelny (Tatarstan) is the third hotel to be signed as part of the multiple development franchise agreement signed in March 2013 with Regional Hotel Chain (RHC), to develop 15 new hotels in Russia by 2019.  The 145-room new-build property is due to open in the second quarter of 2015 and is the first internationally branded hotel in the local area.

Similarly, the newly built 115-room Staybridge Suites hotel will be the first branded extended-stay hotel in Baku (Azerbaijan) located in an area showing high demand for longer term accommodation due to the city’s booming energy industry and an influx of tourism.

The 145-room Holiday Inn Express Samara (Russia) is a conversion from an office building and is due to open towards the end of 2015.  The hotel will occupy a central location in the city of Samara.  It is Russia's sixth largest city and a host city for the 2018 FIFA Football World Cup. www.ihg.com