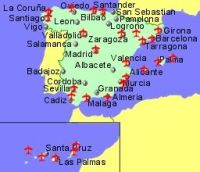 Spain has announced that it will cut the taxes airlines pay to use the country's airports and remove the charge entirely in some cases in an attempt to boost falling traffic.

The cuts will reverse increases made over the past two years, which doubled tariffs at Spain's two largest airports in Madrid and Barcelona and prompted easyJet to close its Madrid base and Ryanair to reduce flights and routes.

Works Minister Ana Pastor said that the measure could increase traffic in Spain's 46 airports by about 2%, or almost 4m passenger. The numbers were down 4.9% year on year in the first nine months of the year, or by 7.5m, on falling demand for domestic flights in the midst of an economic slump and the elimination of routes across Spain.

The reduced tariffs will take effect from 1 January. www.aena-aeropuertos.es