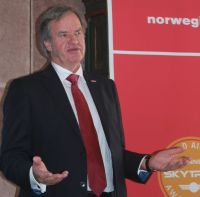 Norwegian Air Shuttle (better known as Norwegian but not to be confused with cruise line NCL) will take on one of the most competitive markets in the world from next summer, launching low-cost flights between Britain and the United States.  The non-EU operator, who already services New York from Oslo and plans to introduce Copenhagen and Stockholm to Ft Lauderdale Florida in November, has announced routes to JFK once again, Ft Lauderdale and Los Angeles from July 2014 from Gatwick.

Norwegian is already well established at the south London airport with three Boeing 737-800s based there and 24 current routes, many of them serviced by aircraft from Scandinavia.  The airline says that much business is expected to be derived from connecting traffic and it will offer return fares from Continental points, and through baggage.

With the help of crew support by Virgin Atlantic (whose Crawley offices are opposite the Boeing European simulator base) Norwegian currently has two Boeing 787s with six more to come.  Whilst the aircraft have experienced teething problems these are expected to be sorted out by next summer with a third aircraft delivered.