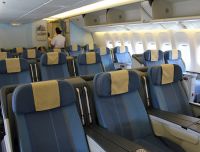 Philippine Airlines (PAL) has confirmed the re-introduction of direct flights from Heathrow to Ninoy Aquino International Airport in Manila, with the first landing set for Monday 4 November, the opening day of World Travel Market.

This will be the initial European destination introduced by the airline after flights to Europe were discontinued in 1998.  The new route will offer the fastest way for passengers to travel to Manila with an average flight time of 12½ hours with five flights each week, with Heathrow departures on Monday, Wednesday, Thursday, Saturday and Sunday.  A 370-seat two-class Boeing 777-300ER will be used on the service.

Philippine Airlines President, Ramon S. Ang, will travel on-board the inaugural flight from Manila to Heathrow and will continue to World Travel Market to celebrate the first non-stop connection between the two countries in 15 years.

The UK is an important market for the Philippines, with one third of the 349,000 European visitors travelling to the country during 2012 coming from the UK.  During the first half of 2013, arrivals from the UK have already reached 60,234 and Philippine Airlines is looking to further expand into other European markets with routes to Amsterdam, Rome and Paris soon to be introduced.  www.philippineairlines.com