DoubleTree by Hilton opens in Lisbon 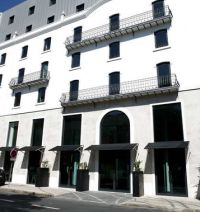 Formerly the Fontana Park Hotel and located in Saldanha Square, DoubleTree by Hilton Lisbon – Fontana Park, is to the north of the city just 5.3km from the airport, and less than 10km from the Gare do Oriente, which connects the Portuguese capital with Spain and France via the high-speed train network.

Offering just 139 guestrooms, the hotel retains much original character including various elements in homage to the building’s previous function as a small iron factory, and the beautiful interior open-air courtyard, complete with waterfall.

Lisbon is rich in culture and history, and boasts a number of world-class attractions, including Ponte Vasco da Gama, the longest bridge in Europe, and the Cristo-Rei monument that stands at 260ft, overlooking the entire city.  Situated at the mouth of the Tagus River where it meets the Atlantic Ocean, Lisbon enjoys a mild climate all year round.