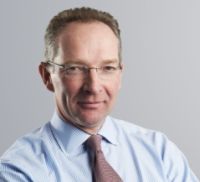 Iain Rawlinson, Executive Chairman of The Monarch Group, is the guest speaker at the Aviation Club next Thursday (24 October).  Once again London’s Institute of Directors is the venue.

Iain is responsible for the day to day management of the Group overall and of Monarch Airlines, now the oldest English airline without any change of identity since its first flight in 1968.  Loganair in Scotland dates back to 1962. Iain read law at Cambridge and was called to the Bar in 1981. After joining Lazard Brothers in 1986, from 1995 to 2000 he was responsible for building and managing Flemings’ investment banking presence in Southern Africa.

In 2000 he became Chief Operating Officer of Fleming Family and Partners, the Fleming family investment business, and until 2005 held various senior executive and advisory positions in this group.

Monarch’s Chief Executive, Kevin George, leaves the airline at the end of the year to take up a similar position with Red Funnel Lines.

For the end of year lunch, Wednesday 4 December, Christoph Mueller, CEO of Aer Lingus, is the guest speaker. The winner of the Club’s annual Fellowship will also be announced. www.aviationclub.org.uk