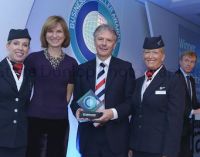 Kensington's Royal Garden Hotel was once again the setting for the Business Traveller Awards 2013 presented by the magazine of the same name.  The ceremony was hosted by newsreader, presenter and journalist Fiona Bruce.

Quite incredibly, Singapore Changi Airport was voted Best Airport in the World for a 26th successive year.

There were in fact 44 awards in total with Heathrow winning the Duty Free category (presumably the cheapest); easyJet, Low Cost; Delta, the North American airline; and Ascott, for Serviced Apartments.  oneworld took the Airline Alliance prize and the Four Seasons Hong Kong was considered the Best Business Hotel Worldwide. www.panaceapublishing.co.uk