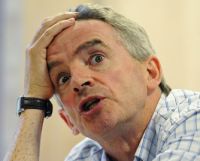 A French court has imposed a €10m fine on Ryanair for employment work law breaches.  The airline said it would appeal to the European courts and if that failed would seek damages from the Irish government.

The ruling is due to the way the airline contractually treats staff based at its overseas (in this case French) bases.

"By refusing to submit to French law... Ryanair managed to dump its social costs, which in turn allowed it to reduce its operating expenses, particularly those relating to staff", the prosecutor said in the ruling by a court in Marseille.

Ryanair was ordered to pay €200,000 in fines and more than €9m in backdated social charges and pension contributions for using Irish-registered workers at its Marseille transport hub between 2007 and 2010, the court said.

The Dublin-based airline argued that by posting Irish-registered employees in France, it was complying with European Union rules on the employment of mobile workers.  It said there was a contradiction between its current practice and French law.

In a statement the airline said: "Ryanair believes this contradiction can ultimately only be resolved by the European Courts upholding EU regulations on the employment of mobile transport workers, and Ryanair intends to pursue this appeal all the way to the European Courts”. www.ryanair.com