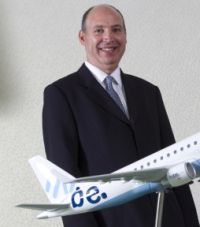 With a completely new management team in place under former easyJet Chief Commercial Officer Saad Hammad, Flybe is looking positive.  Whilst the listed airline is not expected to unveil its detailed plans until the release of second half year figures on 11 November it has announced a new four times a week service to Knock from Birmingham starting 27 October.

This latest route adds to the 23 destinations available from Birmingham amounting to 636 flights a week, including Belfast City, Dusseldorf, Charles de Gaulle and the Channel Islands.

Flybe is Europe's biggest independent regional airline with 187 routes serving 14 countries, from 82 departure points.  It is the largest scheduled airline at Belfast City, Birmingham, Cardiff, Exeter, Inverness, the Isle of Man, Jersey, Manchester and Southampton airports with a 68-strong aircraft fleet – 45 Q400, 14 E195 and 9 E175.  It is 15% owned by BA. www.flybe.com