At Last – An Affordable Real Sportscar! 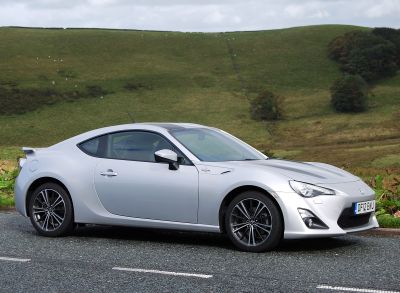 Everything comes to those who wait. So the saying goes. Well it came true for me when Toyota dropped off the Toyota GT86 sports coupe for me to test. Admittedly, the delivery driver had to unwrap his tall frame after exiting the driving seat of this very low slung machine!

He promised I would enjoy the driving experience once I had climbed into the lowly driving seat of this menacing looking two-door machine.

Wryly, I must admit that its presence on my drive indicated to me that this was a modern incarnation, without resorting to retro décor, of true serious sporting machines of about 50 years ago.

An external examination reveals an aircraft style rear spoiler with uplifted tips, two massive chrome exhaust pipes and a front grille that could have been inspired from the Jaws film – it looked ready to devour!

What fun this car promised and a glance at the specification showed that a great deal of imagination had gone into the GT86’s creation.

The engine is a flat four-cylinder double overhead camshaft 2-litre Boxer design, extensively developed from a well proven Subaru basis that, without turbo charging, is capable of punching out 197 bhp at 7,000 rpm.

This engine design obviously allows for a low bonnet line and is thus suited to a long slung body design.

Of course, it has to have rear wheel drive if it is to cater for the serious drivers among us and a fast and accurate 6-speed manual gearbox.

Accessing this car is a bit of an art though once into the high back sports-type driving seat the ergonomics work splendidly for all but the exceptionally tall of stature. Manual seat adjustment, tilt/reach adjustable steering column and excellent pedal location ensure a comfortable and really business-like driving situation.

There is also some padding around the lower cabin area to cosset the front occupants, especially when the firm suspension has to cope with poorer road surfaces.

Fire it up! That’s literally what happens when the engine barks into life – undoubtedly a glorious sound for the die-hard enthusiast.

A light but short clutch action introduces a memorable experience. This car has the potency to pin you back in the seats if the power is optimised…and what an experience that is after all the smooth and sanitised cars one usually drives!

This really is a car that one needs to hire a race track for. It is claimed to hit 62 mph (100 kph) in 7.7 seconds and is said to be good for 140 mph but it is between those two performance figures that the real entertainment can be had.

Work that gearbox, keep the power ‘on the cam’ and it is a real adrenalin experience. Admittedly around town one can discern a reluctance to docility, so aim to keep this one in an element of clear and more interesting roads but don’t get carried away by the performance potential where conditions and legislation restricts, it is very easy to go faster than you realise.

The driving performance is that of a fine instrument – predictable, responsive and very capable, qualities that are hard or near impossible to replicate in a car costing around that of an average mid-range mainstream product.

O.K. the GT86 can be described as a selfish car in so far as it provides a pair of rear seats of such minuscule dimensions that I dared not try myself unless I became stuck.

The luggage compartment is shallow but goes back quite a way and the rear seat back flat fold as one piece, thus providing sufficient load space to qualify the car as a Grand Tourer. There is provision for child seating.

Subaru’s Boxer engine range had, some years back, struggled to reach strongly competitive fuel economy figures (I will shortly be reporting on their latest and best example) and one would expect the GT86’s turn of performance to guzzle up the precious liquid.

Actually, it's not bad, the claimed combined figure is 36.2 mpg and unless one undertakes some serious track use I suggest that 30 mpg is ‘on’. It indicates that the employment of Toyota’s direct fuel injection system has made an important contribution.

Toyota is renowned for creating cars that satisfy a lot of people and now with this highly exciting GT86, this ever forward thinking car maker has come up with a gem of a car that will certainly satisfy a fortunate few.

It has been a long time since I have had so much motoring fun!


AMG (Mercedes) is to launch the 585 hp, S 63 in November priced from £119,565.  The most powerful high-performance saloon in the luxury segment it aims to set new standards in driving dynamics, performance, refinement and technology.  The S 63 AMG boasts an output of 585 hp and 900 Nm of torque and can accelerate from rest to 62 mph in just 4.4 seconds, with a top speed electronically limited to 155 mph.  The S 63 AMG returns 27 mpg on the combined cycle and emissions of 237 g/km. www.mercedes-amg.com

Ford Kuga sales remain strong with over 7,500 already sold this year to date.  The appeal of Kuga’s line-up is to be further enhanced with the debut of a new luxury, feature-packed Kuga Titanium X Sport series, priced from £28,345.  Over 80% of Ford Kuga customers opt for the highly specified models Titanium or Titanium X.  85% of these add the optional appearance pack and over 40% choose the convenience pack which includes power fold door mirrors and Active Park Assist.  The segment-first hands-free power tailgate has also proved popular with 25% of customers benefiting from the kick activated tailgate opening. www.ford.co.uk

Honda's new Civic estate, or Tourer as it's called, has been specifically designed and developed for Europe, in Europe, and is built at the Japanese company's Swindon plant.  The Tourer made its public debut at last month's Frankfurt Motor Show.  Engine options will be the 1.6-litre iDTEC diesel first seen in the new Civic hatchback or Honda's 1.8-litre petrol iVTEC, although the diesel is expected to be the biggest seller.  The Tourer will go into UK showrooms early next spring pitched at a market dominated by the Ford Focus and Vauxhall Astra and also the Volkswagen Golf and Skoda Octavia. www.honda.uk

Mazda is now launching MZD Connect – its brand-new connectivity system – on the all-new Mazda3.  When it goes on sale in the UK in January 2014, the company's new-generation compact will be one of the first in its segment to offer a huge package of online services to go along with the completely redeveloped human-machine interface (HMI) in the cabin.  MZD Connect works together with the user's smartphone, expanding Mazda's existing range of navigation and SMS features (including readout and voice recognition) with a whole new scale of connected convenience.  Mazda3 occupants can thus enjoy carefree real-time access to infotainment services from AhaTM via the 7-inch display on top of the centre stack.  All users need is the free A app for their smartphones to connect in the car via Bluetooth or USB. www.mazda.uk

Vauxhall’s new Insignia is about to hit the showrooms.  The highly successful medium size car is not only the lowest CO2 emitter in its sector but now also the most streamlined vehicle in the world in its class.  Thanks to clever changes to the body design engineers have reduced the vehicle’s drag coefficient to under 0.25 for the Insignia hatchback and 0.28 for the Sports Tourer.  New extended underbody covers, wider front spoiler lips, tail lamp housings designed to enhance airflow separation and an integrated rear deck lid spoiler contribute to the new Insignia’s slippery shape.  Available as a five-door Hatch, four-door Saloon and Sports Tourer, the new range now starts at just £16,279, nearly £2,000 less than entry into the outgoing line-up.  And as with all new Vauxhalls, the New Insignia comes with a Lifetime Warranty that gives first owners peace of mind as long as they own the car. www.vauxhall.co.uk

Volvo V60 D6 AWD, the world's first plug-in diesel hybrid is now on sale in the UK.  The Swedish company has announced a partnership with British Gas to help ensure customers' properties are ready to charge their new vehicle. Until March 2015, purchaser of the model will be eligible for a free car charging package from British Gas, which includes a charge point and free access to the Polar Charging network across the UK. www.volvo.co.uk