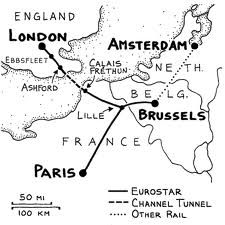 London to Amsterdam has been announced by Eurostar, but don’t get too excited.

The long-awaited extension of the Brussels service will not happen until December 2016.  If the introduction of the then Waterloo to Paris Gare du Nord trains in 1994 is anything to go by, when the summer airline season starts in April 2017 flights from the five London airports would have been reduced substantially to AMS.  In the past the huge improvements by Virgin Trains on the Manchester – Euston line caused the withdrawal of the flights into London City entirely.

Eurostar plans to run two services a day with journey times of around four hours.  The routing will be via Brussels, Antwerp , Rotterdam, Schipol Airport and Amsterdam Central.

Nicolas Petrovic, Chief Executive of Eurostar, said: “We have long been ambitious for expansion to new destinations so today’s announcement marks a major advance in our growth plans.  With over three million passengers travelling by air between London and Amsterdam, this is one of Europe’s most popular routes.  Our fast, comfortable, point-to-point service will greatly enhance the links between the UK and the near continent, revolutionising travel between these important financial and tourist hubs”. www.eurostar.com