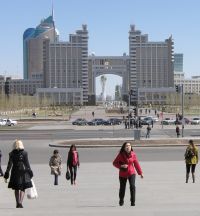 Kazakhstan is to be further linked to London.  Air Astana, the national airline, which for a number of years has offered a twice weekly Almaty service, is to introduce a weekly operation from the start of the winter season on 31 October to the national capital Astana.

In the past bmi served Astana from Heathrow but since the takeover by British Airways it has concentrated on the country’s largest city and commercial centre of Almaty (Alma-Ata) with a three times per week operation (Tuesday, Thursday, Saturday).

The Heathrow – Astana route will operate on Tuesday with a 17:15 departure from London for an 05:30 arrival the next day at Astana.  Astana – Heathrow flights will run on Thursdays with a 15:15 departure for a 16:05 arrival in London.

As part of the changes, Air Astana’s current Heathrow – Almaty service will switch from Tuesday to Thursday.  The other Almaty flight departs Heathrow on Saturday. www.airastana.com