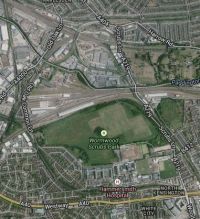 A Treasury-led task force scrutinising the proposed high-speed rail line between London and the north would consider axing the most expensive last few miles of the route into Euston, according to Lord Deighton, infrastructure minister, as reported in The Financial Times.

Asked if he would look at scrapping the last 7km of tunnel that takes trains from a proposed new station in west London, called Old Oak Common, to Euston, Lord Deighton said: “Looking at opportunities to do things more efficiently is something we are prepared to consider”.

If the Euston section were abandoned, the line would instead start and terminate at Old Oak Common, which will be connected to central London by the west-to-east Crossrail line, already under construction.  The Old Oak Common site (which most recently housed the Eurostar engineering train sheds) is sited between the Willesden Junction complex and Wormwood Scrubs.  Surface access is very poor with a single track road to one of the busiest sections of the A40. www.hs2.org.uk