Lufthansa changes at the top 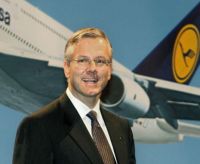 For the second time in less than 12 months a major European airline has changed captains with the previous commander leaving an airline struggling with economic woes.  Air France saw the departure of Jean-Cyril Spinetta in May of this year replaced by Alexandre de Juniac, and now Lufthansa.  The German airline has confirmed Chief Executive Christoph Franz will step down when his contract expires at the end of May 2014.

The move comes as a shock to the carrier, with Franz having been in the role for just three years.  The 53-year old will take up the role of Chairman of Swiss drug maker Roche Holding.  A successor has not been announced.

The change of leadership comes at an interesting time for Lufthansa as it implements a programme called SCORE designed to cut costs as the carrier battles emerging low-cost carriers, Middle Eastern super-connectors and rising fuel costs.

Lufthansa has also announced a major order for new aircraft comprising of 34 Boeing 777-9X and 25 Airbus A350-900.  This would appear to signal the end of the line for the Boeing 747, Lufthansa seemingly happy with the 19 on order, but no more.  The US President is likely to have the final production 8i series plane in 2015. www.lufthansa.com