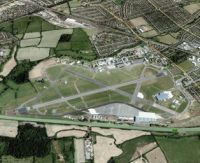 There seems to be progress with the concept of RAF Northolt as a short/medium term remedy for the crisis concerning the UK regions and their lack of air links into London, compounded by Flybe’s pullout from Gatwick.  Clearly it is something that the Davies Commission will be looking at.#

The Government has announced the completion of a review looking into various options for the airport’s future and has decided that the existing self-imposed limit of 7,000 commercial annual movements can be increased to 12,000 over the next three years.  In a Parliamentary answer Philipp Dunne, the Junior Defence Minister, said:  "As the appropriate aviation regulatory authorities, the Ministry of Defence consulted with the Department for Transport, the Civil Aviation Authority and National Air Traffic Services before the decision was taken to increase the revenue from commercial aviation flights at RAF Northolt".  No reference to any adverse impact on Heathrow.

Davies has before it at least two schemes for the use of Northolt.  The most ambitious one is by a City lead group called Rothwell (Spectrum Capital) which proposes a 2,500m entirely new runway parallel with the A40.  Whilst practical it is costly and as complex as the Heathrow third runway scheme.  The alternative is a simple regeneration of the current site basically for regional domestic operations. www.spectrumcapital.co.uk  The BTN scheme