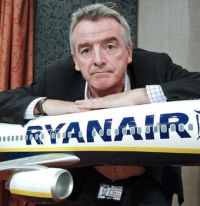 Smarting from its continued Aer Lingus rebuff by both UK and European administrators, and with the ‘world’s most annoying airline’ status, Ryanair is now having problems with its yield per passenger, just when things are positive for other carriers.  In contrast last week easyJet told investors that passenger numbers had increased by 3.9% in August and load factor by 1.1%.

Michael O’Leary blamed the hot summer in northern Europe which, he said, stopped people from travelling.

Ryanair’s response to what it calls a “weaker outlook” is to selectively reduce its winter season capacity and roll out lower fares and "aggressive" seat promotions in markets including the UK.  The strategy will cut its annual traffic forecast by 500,000 to 81m while profits will be at the lower end of its previous forecast of between €570m (£483m) and €600m (£508m).  The shares quickly fell by 14%, and have hardly recovered.  The news also affected easyJet which initially dropped 7% and bounced back in the FTSE 100 Index whilst Thomson Holidays' owner, TUI Travel, and British Airways' parent firm, International Airlines Group, were 4% lower. www.ryanair.com