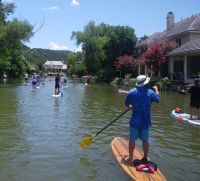 In March 2014 British Airways is to become the first airline to offer non-stop flights from Heathrow to Austin, Texas.  Introduced with five flights a week it moves to daily flights on 5 May, the airline’s brand new Boeing 787 Dreamliner with its three-cabin layout will serve the route to the Texan capital.

The full summer 2014 schedule, which starts from 30 March, will see a number of increases in long haul flying to a variety of destinations.

The airline started flying to Seoul (South Korea) in December 2012, and will increase from six services a week to daily.

It is also significantly increasing flights to Accra (Ghana).  From the start of the winter 2013 season an additional three flights a week are being added, bringing the total number of weekly services up to 10.  From summer 2014, a larger four-cabin Boeing 747 aircraft will replace one of the Boeing 777s currently on the route.  Lusaka is dropped.

British Airways is set to increase capacity between London and Tel Aviv when it introduces a daily wide-bodied four-cabin Boeing 777-200 to the route, replacing a two-class Airbus A321 aircraft on one of the three services  The flights will also switch from Terminal 1 to Terminal 5. www.ba.com