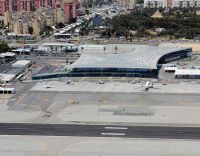 In spite of difficulties raised by the neighbouring Spanish authorities Gibraltar Airport continues to grow in passenger numbers, although not at the rate the Government of the British Overseas territory would wish.  A record 387,000 passengers used the airport last year, many passing straight into Spain.  Currently British Airways offer flights from Heathrow, easyJet from Gatwick, and Monarch from Birmingham, Luton and Manchester.  Back in 2007 both BA and Iberia ran short lived services from Madrid.

Gibraltar is a member of the EU, but like the United Kingdom still has controls on its border.  Last week the Spanish slowed down the border crossing, claiming differences over fishing rights.

A new modern terminal fully opened in September 2012, the idea being that it would serve both Spain and the British enclave in the same way as Basle does for Switzerland and France.  The road into Gibraltar from Spain crosses the runway which is closed for aircraft movements causing problems.  A tunnel is planned. www.gibraltarairport.gi