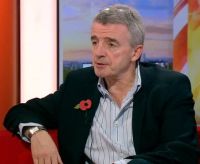 The Airport Operators Association (AOA) has confirmed that its Annual Conference & Exhibition will be held on 21 and 22 October, once again at the London Hilton Metropole near Paddington Station.

AOA has secured an excellent range of speakers including Willie Walsh, Chief Executive of International Airlines Group, and Michael O’Leary, Chief Executive of Ryanair, both of whom will engage in a Hardtalk style interview with moderator John Humphreys, of the BBC’s Today programme.