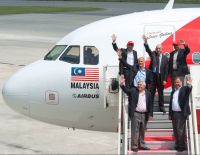 AirAsia’s Indonesian wing has become the recipient of the 8,000th Airbus, an A320.

Not everything Airbus has built has been a success.  The small A318 has sold in very small numbers (79), the A340 with its four engines is the aircraft everyone wants to get out of, and whilst the A380 is probably the nicest aircraft to fly in these days, it still has to be proved sales-wise.  Boeing has one plant to produce the 737 in similar numbers to the four that Airbus will have by 2015 for the A320 series.

At the present time there are around 7,350 Airbus aircraft in service and the forward order book includes 682 A350 and 2,350 for the advanced A320 Neo series. www.airbus.com