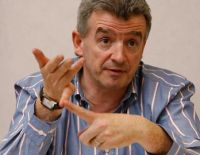 Michael O’Leary is a firm believer in the maxim “All publicity is good publicity”.  The carrier dubbed by some “The world’s most annoying airline” but likely to carry around 80m passengers this year, has been much in the news last week.

Firstly it announced that profits had fallen in the first quarter by 21% to €78m followed by CEO Michael O’Leary, in an increasingly rare London press conference appearance, confirming that he had told pilots to slow down to conserve fuel.

Asked regarding the logic behind Ryanair’s €20 increase in hold baggage charges for the summer period, he said that this is “when people bring more bags.  We don’t want the bags.  We will keep increasing charges until we get rid of bags”.  He did echo one common theme saying that the Airport Commission was a way for the Prime Minister to put off any decision until after the election.

Regarding the airline’s fight with UK and European legislators concerning an Aer Lingus takeover, Ryanair is to add a minimum of flights from Dublin to Birmingham, Edinburgh, London and Manchester this winter.  This is possibly an EU appeasement, a double-edged sword which will also affect the Aer Arann regional operation.  Whilst not directly involving Ryanair the carrier’s aircrew supplier lost a dismissal case in the English Courts last week. www.ryanair.com