A380 at Stansted for the first time 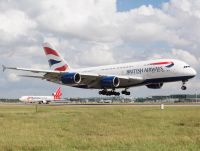 Last week British Airways brought an A380 into London’s Stansted airport for the first time.  It was part of a training programme to familiarise both the aircrew and the ground handling staff with the mighty Airbus.

Stansted was awarded status by the Civil Aviation Authority (CAA) in 2010 to allow both the A380 and the Boeing 747-8 to operate from the airport.  Three 747-8 freighters have been based at the Essex operation since 2011.  Stansted is designated as a standby runway for BA if a diversion is required for any reason.

British Airways currently has a single A380 with a further one due in September and a third in early October.

As things stand Los Angeles will be the first route from 24 September, Hong Kong 22 October and Johannesburg 12 February.

Readers should be careful when booking and wishing to fly on the Airbus for the immediate future.  All the routes are long haul and require more than 24 hours in total meaning that a proper daily service cannot be achieved this year.  A further five aircraft will be delivered in 2014.  www.ba.com