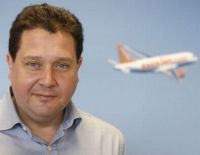 EasyJet has confirmed the immediate departure of Paul Simmons, Regional General Manager UK, the British sales face of the airline.  He takes up a position with another yet to be named British-based travel organisation in October.

In a statement the airline said: “EasyJet can confirm that Paul Simmons, Director UK Market, has decided to leave the airline in order to take up a lead commercial role in another UK travel company.

“EasyJet would like to thank Paul for his passion, dedication, hard work and pioneering spirit over the last seven years.

“Paul first joined easyJet in June 2006 and during his time was responsible for overseeing the commercial roll-out of many new initiatives including Speedy Boarding, easyJet Plus and GDS distribution as well as leading easyJet’s commercial team in the UK and overseeing leisure sales and easyJet holidays”.

Paul graduated from Nottingham University and was Global Vice President – InterContinental Brand IHG, 2001-2003, before taking up a similar position with The Oberoi Group, joining easyJet in June 2006. www.easyjet.com