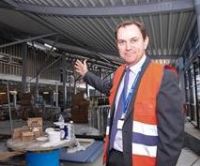 Alistair Welch, the popular Managing Director of Southend Airport, has resigned “to move on to new challenges”.

In a statement Andrew Tinkler, CEO, Stobart Group, the airport's owner, said: “I would like to thank Alastair for the contribution that he has made to the development of London Southend Airport, and wish him every success for the future”.

Stobart Group acquired Southend Airport in December 2008, transforming the airport.  The single runway has been lengthened allowing for Airbus 319 and Boeing 737-700 operations.  Major new features include a railway station, hotel, passenger terminal and control tower as well as technical upgrades.  From virtually zero passengers in 2011 it will surpass one million this year.

Mr Welch has spent much of his career with the former BAA in various capacities and prior to 2008 when he joined Southend was Terminal Manager at Stansted.

The team at Southend Airport will now be led by Roger Clements, who has been involved for some time with the Group on its Air division.  Roger has in recent months been working closely with Alastair to achieve a seamless transition.  Mr Welch leaves at the end of July. www.southendairport.com