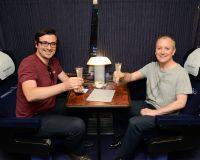 First Great Western had a very special gift in store for passengers of the sleeper services when the Night Riviera celebrated its 30th birthday last week.  Introduced in its present form on 11 July 1983, the sleeper service, running in both directions between London Paddington and Penzance, has gone from strength to strength.

First Great Western, which has operated the service since 2006, provided each passenger with a special anniversary cup cake and, in support of local producers, a glass of Camel Valley Brut from Cornwall.

In 2008 a £2m refurbishment saw 17 sleeper carriages receive new interior décor, lighting and re-upholstered First Class-style seating giving carriages a more comfortable, relaxed feel, as well as better quality linens and towels.  Further improvements were made in 2012, when old style blankets were replaced with duvets for the first time.

The first sleeping car train on the Great Western Railway was introduced at the end of 1877 from Paddington to Plymouth. Services depart from Paddington at 23:45 and Penzance at 21:45.

The service's future was established by the Secretary of State for Transport in June 2012, when it was confirmed that it was to be included in future franchise tenders. www.firstgreatwestern.co.uk