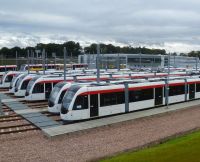 It could be before the year has ended that passengers from Edinburgh Airport to the centre of the city might be using the new tram system.

Trials are now taking place along the whole length of the current eight miles of track.  The train units have been delivered.

The controversial scheme has been actually under construction since 2008, with work stopped in 2010/2011 over contractual difficulties. Estimated in 2003 to cost £375m it will come in at over £1bn and only run from a site on the airport to York Street, fairly close by Waverley Station.  First Minister Alex Salmond is likely to open the system, a comparison being noted with Ken Livingston, who opposed London City Airport but chose to cut the tape for the extension of the DLR to that successful project.  Mr Salmond has blown hot and cold over the tram.

The tramway will stop at Murrayfield Stadium, and also Edinburgh Park and Haymarket, both on the National Rail network.  The current return fare by bus from the airport is £6, likely to be replicated for the tram.  Road closures for the current work has caused serious traffic problems in the city, but these should disappear once the scheme is up and running. www.edinburgh.gov.uk/trams