All change at Flybe 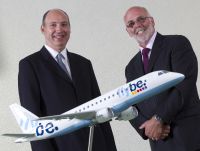 With the airline going through a complete reshaping process following poor trading Flybe has announced a change at the top.  Effective 1 August Jim French, formerly Chairman and Chief Executive, takes a non-executive role as Chairman of the Plc with Saad Hammad joining as Chief Executive Officer.

Mr Hammad brings considerable airline, commercial and business transformation experience to Flybe.  As a popular Chief Commercial Officer of easyJet Plc from October 2005 to April 2009, he was credited as being the architect and driving force behind the airline’s commercial transformation, delivering significant revenue growth and margin enhancement and creating the European network which formed the basis of building easyJet into one of Europe’s most successful airlines.

Between May 2011 and October 2012 Mr Hammad acted as Non-executive Director of Air Berlin.  He is currently a Managing Director at the Gores Group, an operations-focused private equity firm with circa US$4bn under management. www.flybe.com