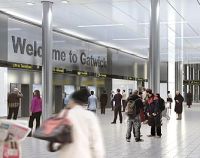 Business travellers should not be too alarmed as the London airports make out their cases for the Airport Commission to consider, and rather like the airlines, say how hard done-by they are.

Gatwick will be submitting its final suggestions to ‘Davies’ over the next couple of weeks which will include a second runway.  The £5bn project can be funded privately according to the airport’s CEO, Stewart Wingate.  Gatwick is owned by a consortium led by Global Infrastructure Partners, an investment manager, and the Abu Dhabi Investment Authority, the sovereign wealth fund.

Mr Wingate has put himself on something of a collision course with easyJet, the largest airline at Gatwick, by rejecting its call for a real terms cut in the charges that the airport levies on carriers for using its facilities.  These are determined by the CAA.

Mr Wingate raised strong doubts that a third runway could be built at Heathrow because of environmental and noise issues. www.gatwickairport.com