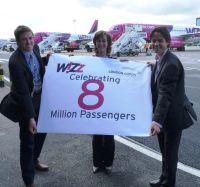 Wizz Air, Geneva-based and claimed to be the largest budget airline in Central and Eastern Europe, is to introduce flights from Luton to Kosice, Slovakia’s second largest city.  The route commences 17 September, initially twice weekly and will increase to four flights per week from 27 October.

Wizz says that Slovakian traffic will hugely benefit by low air fares, attracting more passengers in and out of Kosice.  Slovakian citizens are very keen to live and work abroad, primarily in Western Europe.  The access to low-cost air travel between Slovakia and the United Kingdom will be welcomed by tourists, business travellers and the Slovakian diaspora.

An historic city, Kosice is currently the European ‘Capital of Culture’ together with Marseilles and has a population of around 250,000.  Slovakia, subject of the Velvet (peaceful) Revolution back in 1993 and has one of the fastest fiscal growth rates in Europe.  www.wizzair.com