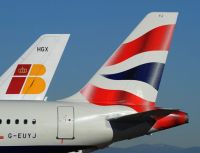 Spanish bank Bankia has sold its 12.1% stake in IAG (British Airways, Iberia and Vueling) to institutional investors last Thursday for £580m.  An International Airline Group (IAG) spokeswoman declined to say who had purchased the shares.

In the last few weeks there has been a number of largish offloading of IAG on the London market, potentially opening a period of shareholder instability for the airline group.  However the shares have continued to hover around the 260p mark, not as high as a peak 280p in May, but well above the 160p of 12 months ago.

Bankia, which was bailed out by the Spanish state last year, has been under pressure to sell its corporate shareholdings, but the disposal of IAG comes at a difficult time with Iberia in crisis mode and major job losses on the way.

In Spain analysts said that the IAG sale was earlier than anticipated.

"The key is going to be finding out who the real buyer is", BPI analyst Joao Safar said.  Bankia was the largest shareholder.

IAG said last week that Iberia has become unprofitable in all markets, including long haul, and its problems are critical. www.iairgroup.com