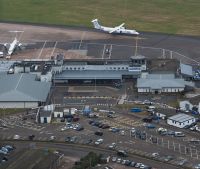 Balfour Beatty has sold its 60% share of Exeter Airport to Patriot Aerospace, the aviation division of Rigby Group.  No financial details were disclosed.

Rigby also owns Coventry Airport, now seemingly redundant in the Midlands area, still the main technical base for cargo airline West Atlantic but attracting few executive jets and other movements.  In 2008 both Thomson Airways and Wizz Air abandoned their operations at Coventry Airport, the previous year 750,000 passengers passing through.

The 40% balance is owned by Galaxy Sarl, a specialist fund backed by French and Italian investors and the European Commission.

The sale price this time was not disclosed but Balfour Beatty said that the proceeds from the sale would be used to repay the funders.  Last year the value of the investment was written down from £12m to zero in the company’s accounts.