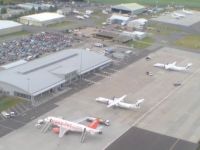 EasyJet will continue with flights between Inverness and Gatwick next year when it becomes the sole carrier between the Highland capital and London next year.

No decision has yet been made on the three times daily Newquay - Gatwick route which Flybe is giving up at the end of March 2014.  Newquay, rather like Inverness, is also served by easyJet, this time by a three times per week summer only route from Southend.  The consequences of no air links from Cornwall to London are serious for the most remote English south west county.

Last month it was announced the company had bought Flybe's Gatwick slots for £20m, and there was much concern that the three Inverness weekday services would be used for more lucrative European flights.  The plan is now to drop the midday flight and actually increase capacity, easyJet’s A319 jets quicker and larger than Flybe’s Q400 turboprops.  Also retained is the airline’s midday return to Luton.  Inverness is unique as a major UK mainland airport in that passengers do not have to pay outbound Air Passenger Duty (APD), the Highlands seen as a special enterprise zone.

Hugh Aitken, UK Commercial Manager said: "This deal demonstrates easyJet's commitment to Inverness and the Highlands.  The new early flight will allow business travellers to reach London in time for meetings while the evening departure from London enables them to travel home on the same day. The additional seats will also help boost tourism to the Highlands". www.easyjet.com