A380 for London Thai service 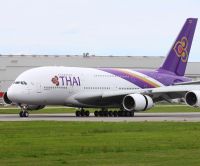 Thai Airways says it plans to operate the Airbus A380 on the Heathrow – Bangkok route towards the end of this year following delivery of its fifth and sixth aircraft.  The airline says it will be more specific once arrival dates are confirmed by Airbus.

Malaysia and Singapore, competing airlines on non-stop routes to South East Asia, have already put the Toulouse-assembled super jumbo on their London services.

Two daily flights to London split between an A380 and 747 would match Thai’s service to Frankfurt, the main focus for the carrier’s European transfer traffic, the airline part of the Star Alliance partnership.

The Bangkok-based carrier will also shortly operate a daily A380 service to Paris using its third and fourth A380s.